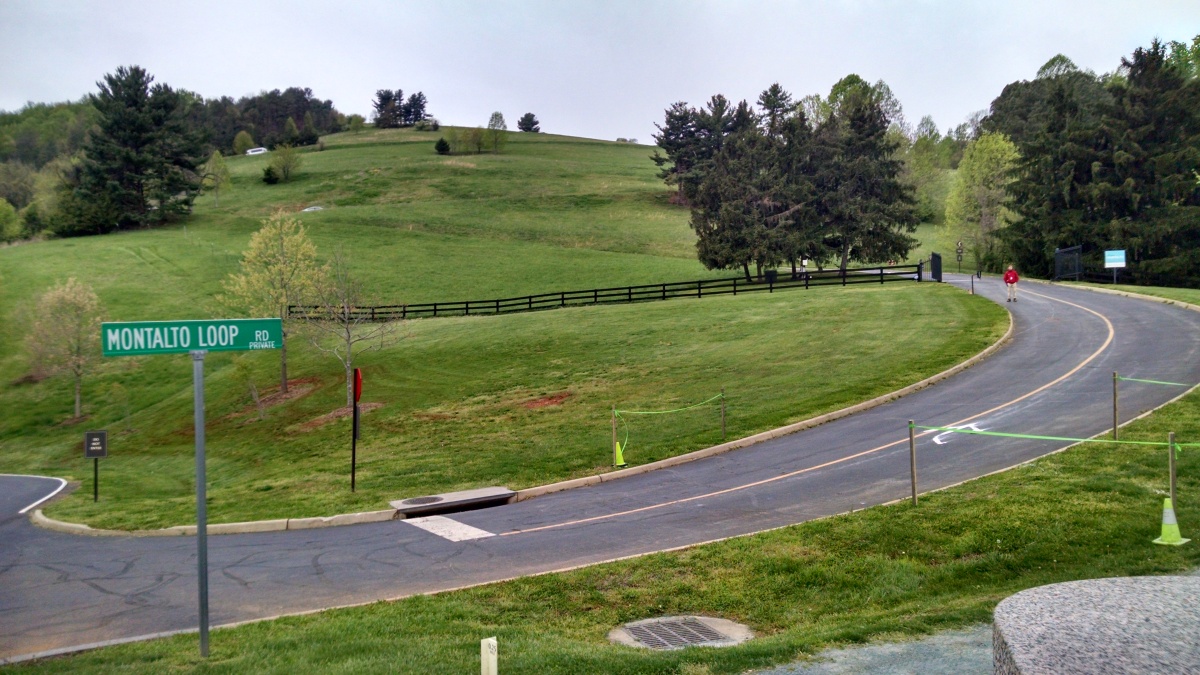 This morning I ran my fifth (and slowest ever) Montalto Challenge 5k.

In pretty much perfect weather conditions.

Oh, but shoot. I probably shouldn’t begin my race recap with that if I’m trying to be more positive, should I?

Let me start over.

I suck. What the hell is WRONG with me?

Crap. That’s not any better, is it?

The Montalto Challenge 5k is one of my favorite local races. It’s an all uphill race that starts at the base of the Trail at Monticello and climbs to the top of Montalto.

The first half is gorgeous (and much tougher than it looks on this profile) and the last half is absolutely breathtaking in every way. It’s a steep climb with stunning views.

My legs had been incredibly sore all week after running the Blue Ridge Half Marathon last weekend. It was Wednesday before I could go down stairs without wincing. It was Thursday before I attempted to run and I had to stop after two miles because my hamstring was cramping up.

I didn’t want to miss the Montalto Challenge, though. I also want to stop avoiding races just because I don’t feel like I’m going to run well.

So off we went.

The race had an earlier (7:30) start time this year, which was fine with me. I had been awake since four.

Kurt and I registered at the Monticello Visitor’s Center, then jogged the two miles down to the starting line, passing the one mile mark on our way down.

I turned around to get some pictures. 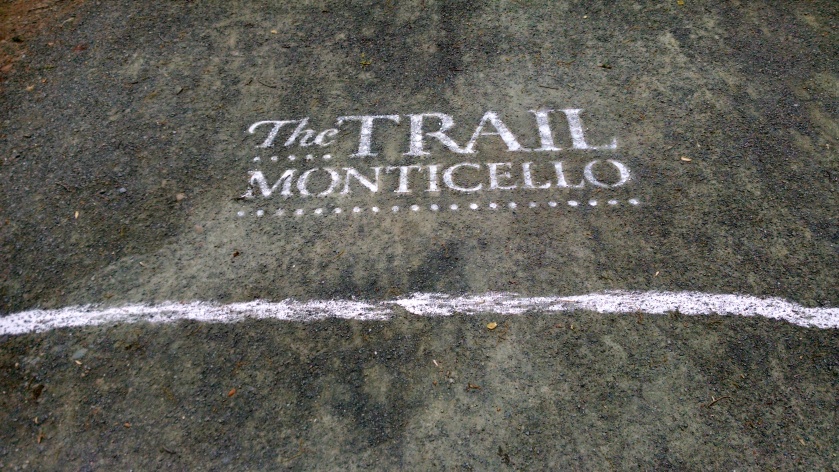 We made it down with just enough time to check our bags (and by check, I mean attach name tags and throw them in the back of a pick-up truck) and hit the port-a-johns.

We met up with Andi and Patrick at the starting line.

And we were off.

I wasn’t feeling particularly energetic. After all, this was my third race in three weeks. That’s more than I do when I’m not just coming back from an injury. So I didn’t feel too badly about taking it kind of easy for the first mile and a half.

Even after holding back a little in the first half, the switchbacks up Montalto were still a struggle. I walked a few steps on the steepest part of each of the last 5 (of 7) switchbacks.

Okay, Okay, maybe I walked more than a few steps on one or two of them.

I was mentally and physically too exhausted to give 100%, which probably means I don’t have a right to whine about my finishing time. But that doesn’t mean I wasn’t working extremely hard. This race lives up to its name. There is no doubt that it is a challenge.

I was actually a little surprised when I got close enough to see the clock at the finish. I hadn’t looked at my Garmin but felt like I’d run even slower than I had.

Not that I’d run fast. Like I said, it was the slowest I’ve ever run this race.

I crossed the finish line and a volunteer tore my number off my bib and somebody handed me this sticker: 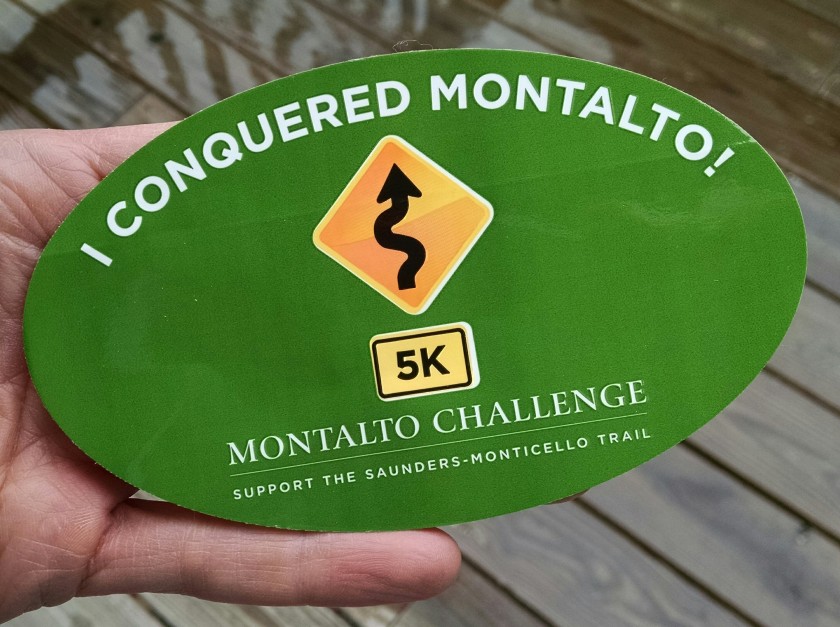 It’s always fun to hang out on top of Montalto after the race and this morning was no different. The views are spectacular. I was surprised to see our local radio personality, Brad Savage up there. He was the finish-line DJ.

We picked up our race shirts. Another good thing about this race is that they always have awesome shirts! They have a simple design with no advertisements and they always offer a women’s cut.

Kurt and I took a sweaty mountain view selfie, then posed for an official picture. 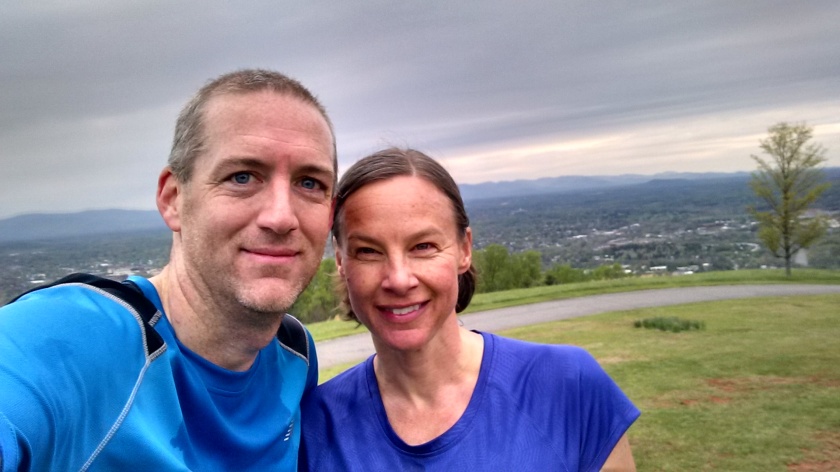 We had one taken with Patrick and Andi too, but I have my eyes closed and some other unattractive things going on in that one. So instead, here’s another picture of the view:

I ate a banana and a huge hunk of bread from Great Harvest.

Even with my coat on, it wasn’t long before I was freezing. At one point, Kurt asked me if it was snowing. I though he was joking and laughed, but then I realized that he was right. There were some flakes mixing in with the rain.

Last year they hadn’t allowed anybody to walk back down the mountain to their cars after the race. Instead, we all had to ride buses.

I was very happy that they went back to allowing us to walk down again this year.

Nemophilist Trail runner Introvert Animal-loving vegetarian * My ideal city would be car-free. I love my cats. View all posts by healthyincville