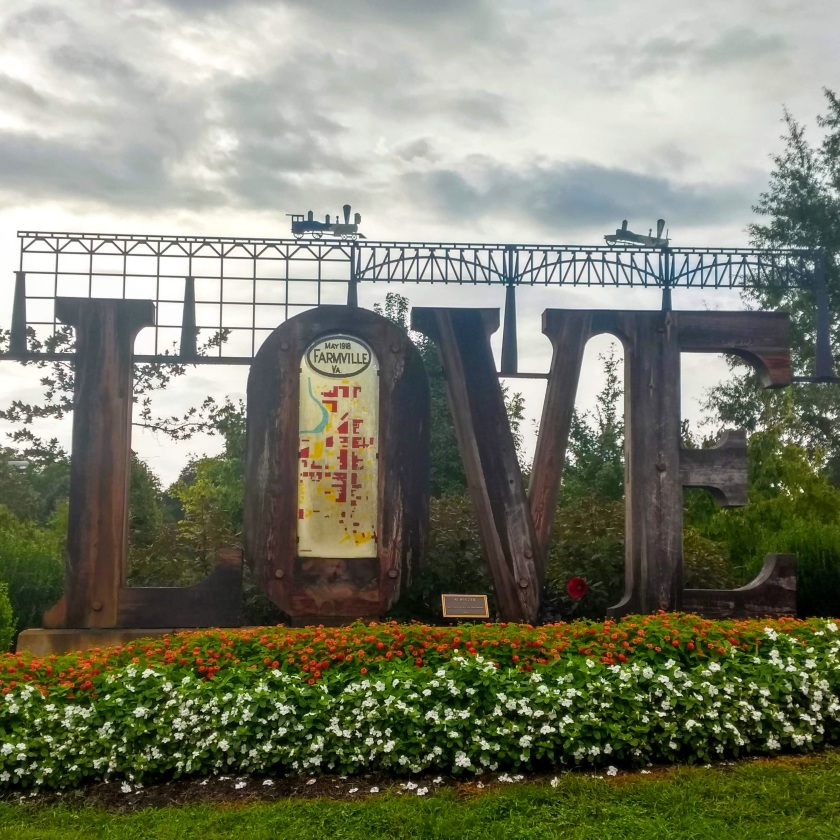 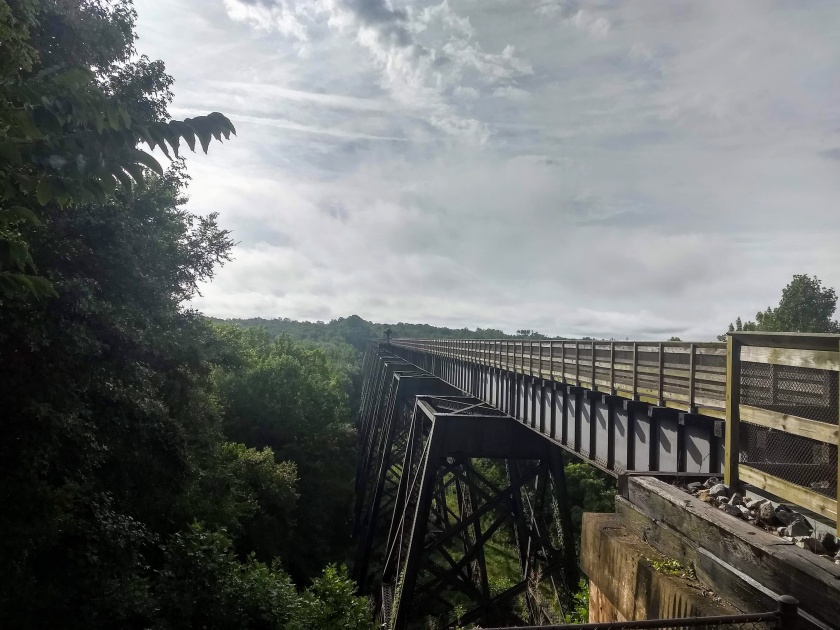 Sweet potato on the run.

The trail was surprisingly quiet for a Saturday, which was really nice.

I used a public restroom for the first time since March.

My ankle started hurting about 13 miles in and Brian hadn’t brought  enough water for the hot and humid morning, so we ended up cutting it short. 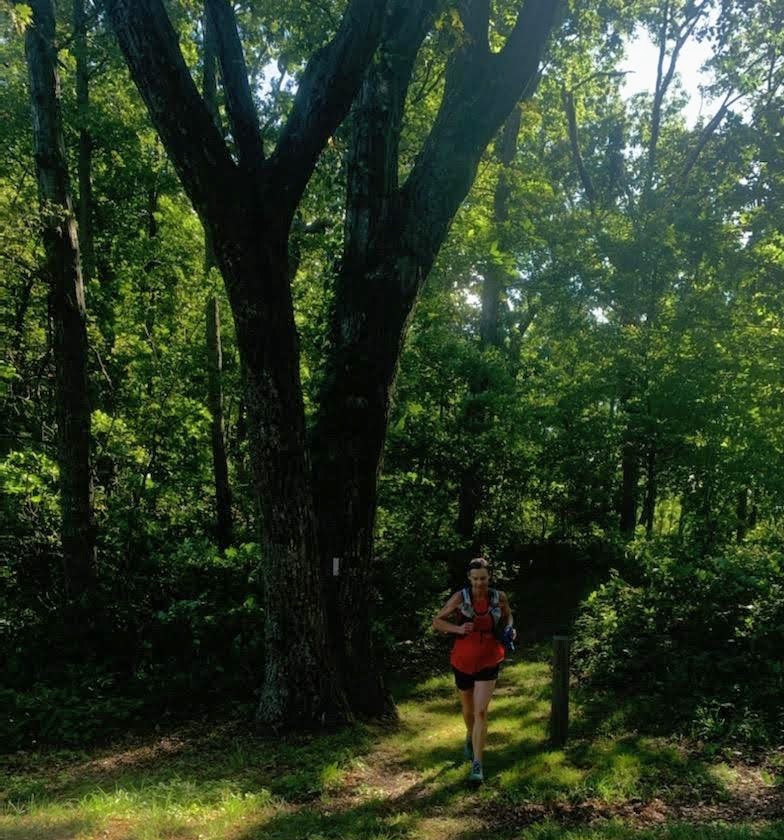 It’s been more than a year since I last ran this loop. It’s a tough one, but blue hole feels even more spectacular when you run 16 miles to get there.

I headed up to Humpback Rocks first. 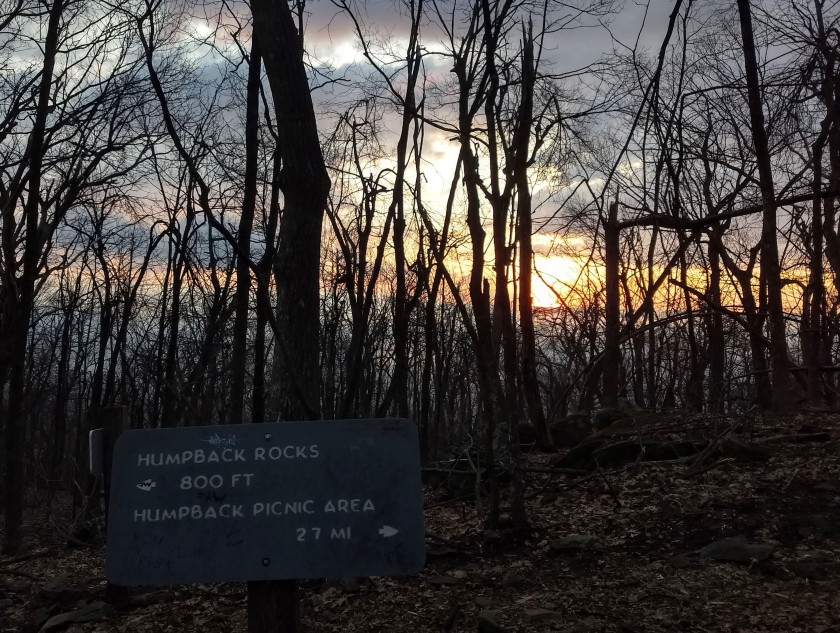 I thought I was too late for the sunrise, but was pleasantly surprised.

There were already quite a few people up there enjoying the view. That made me happy. We should all do this more often. 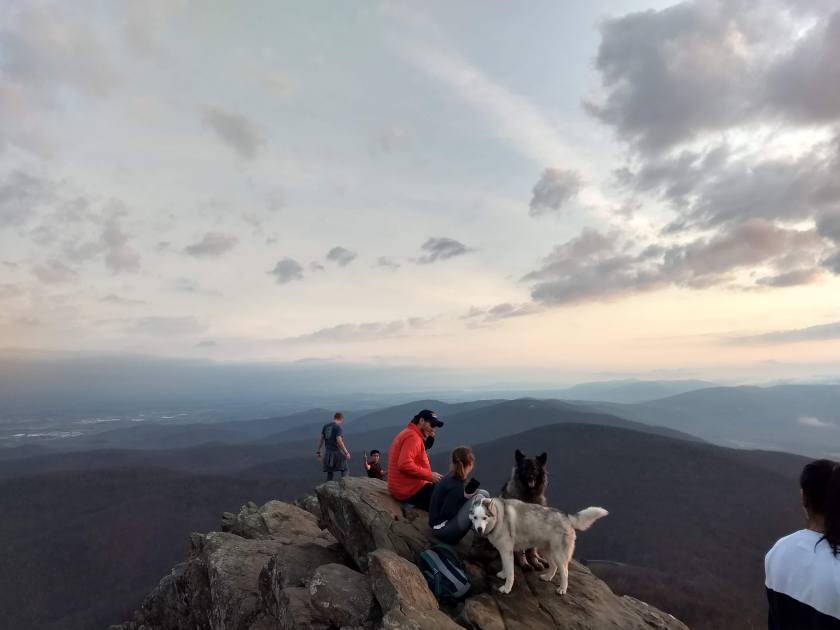 People were camping at every campsite I passed. It was cool to see so many people at the shelter, too.

While I definitely enjoy solitude and generally try to avoid crowds, the trails were eerily empty this winter. It’s nice to see them coming back to life.

My foot felt a lot better when I woke up this morning and it only bothered me for the first couple miles of the run. After that I hardly noticed it at all.

It hurts a little now, though. Not sure what that means.

We ran with the CAT 50K training group again.

I was (of course) worried about the snowy trail, but it ended up not being too bad (kind of fun, actually!). Those river crossings were COLD though. I don’t think I’m going to do trails with river crossings anymore unless it’s above 40 degrees. My toes just don’t warm back up if I get them wet when it’s that cold out.

It was the same course we ran on New Year’s Day and we managed a slightly better pace (even with me tip-toeing through the slippery sections!).

Sugar Hollow to Skyline Drive and back

Such a beautiful day to be running in the mountains. Can’t tell you how much better the sunshine makes me feel.

We made it up to Blackrock! 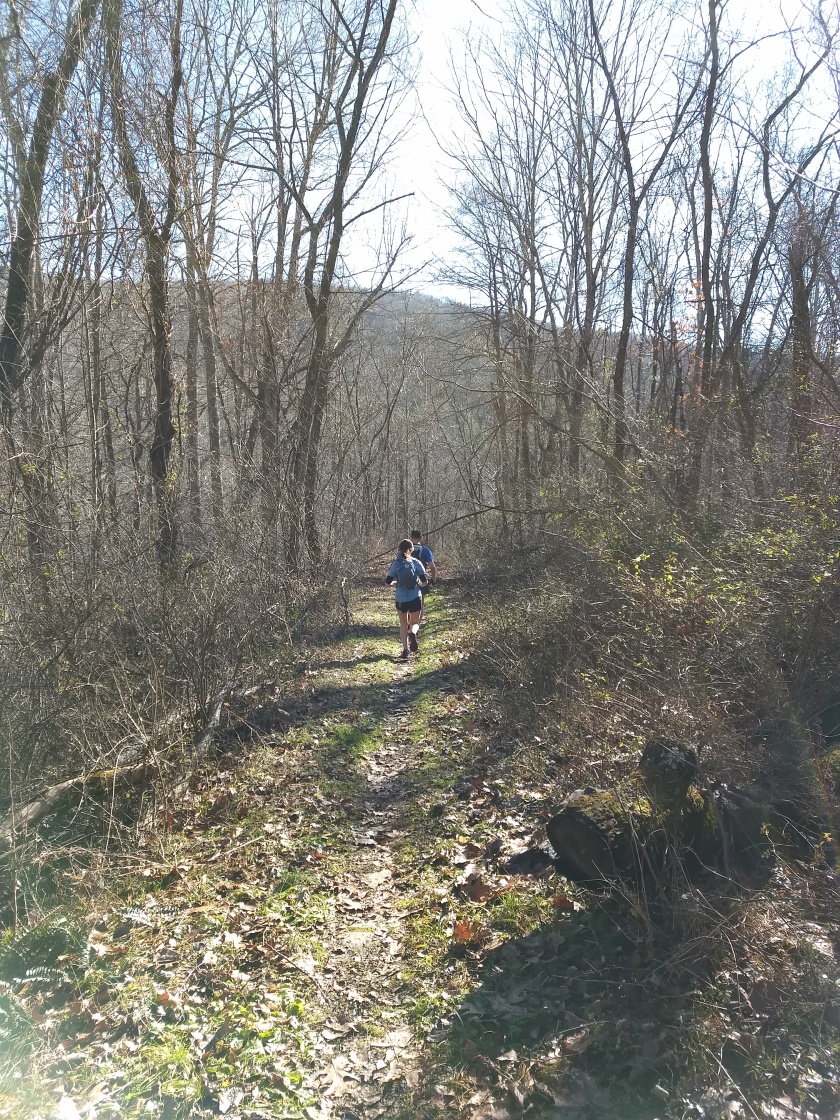 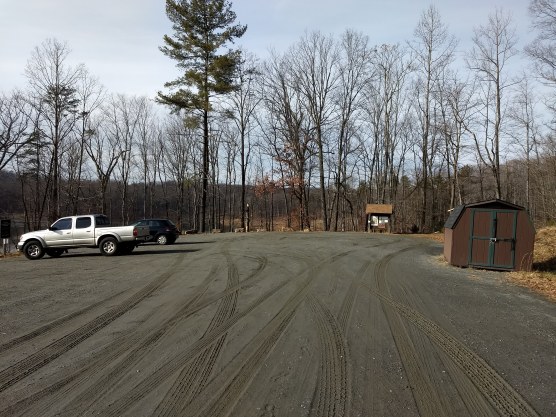 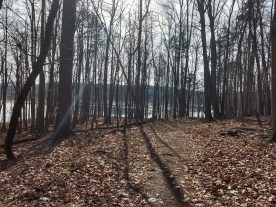 “Fat Ass” runs adhere to the motto “No fees, no awards, no aid, no wimps.”

In his post The Fat Ass Ultra: A History on the Trail and Ultra Running website, Sherpa John writes:

Many folks aren’t too keen on the idea of Fat Ass events, and that is a part of their design. Fat Ass runs typically serve as training runs and social events for those more “committed” ultra runners. Think about it, running 50K or 50 miles for nothing more than the satisfaction that you can do so. No awards, no t-shirt, no nothing. Just miles. In essence, this is the beauty of Fat Ass runs.

The CATAss 25K/50K is our local Charlottesville Area Trail Runner’s version. According to their website, this was their fourth and final one of the year.

It was my first. I was nervous about going. I’ve done a couple of CAT (non-Ass) runs in the past and I’m always one of the slowest people there. Plus, social things scare me.

Options were given for just about every distance up to 50K. Brian and I chose the 24 mile option. The course was nice, but tough. We had done all but the Jones run and Doyles River trails on other training runs. What a doozy those two trails turned out to be. Lots of technical rocky sections and super steep climbing. But also some nice waterfalls.

We were told we needed to carry enough food and water to last for whatever distance we were running. It had been heavily hinted that there would be a “surprise aid station” at Turk gap, though.

Sure enough, Andy Jones Wilkins was up there with an impressive spread of food and drinks and his ever-ready smile. I swear, the guy lives and breathes for running. It doesn’t matter who’s doing it. If someone is running, Andy is happy.

I was really glad he was there, because I would’ve run out of water otherwise.

We ran with a couple different groups for the first 5.5 miles, and saw some people who were doing shorter distances heading back down, but after about mile 7.5, we didn’t see another runner until the finish. We knew that David and Costi were behind us because they were sweeping.

I had some chafing issues (apparently 2Toms SportShield can only stand up to my level of sweating for about two hours). And, although it works great (for a while) if you apply it to dry skin, I’ve had no luck trying to reapply it when I’m already sweating. I don’t sweat like a normal person, though. My shorts were dripping down my legs two hours into the run. Brian’s shorts weren’t even damp. 2Toms still works better than Body Glide, though.

My knee/IT band started bothering me around mile 17, on the descent from Turk mountain. It’s still hurting this morning, which of course is stressing me out.

But I got to jump in Snake hole about a quarter mile from the finish, which felt spectacular. Cold mountain water to wash away all the sweat and grime, plus we were almost done!

When we got back to the parking lot, almost everyone was long gone, but there were a few people who had run 18 or 24 miles still sitting and standing around a table full of snacks down by the river. We hung out for a while, but I needed some real food too badly to stay for long. I wish I’d thought to bring a sandwich. It would’ve been nice to sit by the river and wait for the rest of the runners to come in. My stomach just wasn’t having it.

One little garter snake, lots of bear poop and buckets of sweat.

Followed by BurritOh! in Crozet.

Never an easy run, but the views were great and there were so many wildflowers.

My fear of poison ivy has surpassed my fear of ticks. 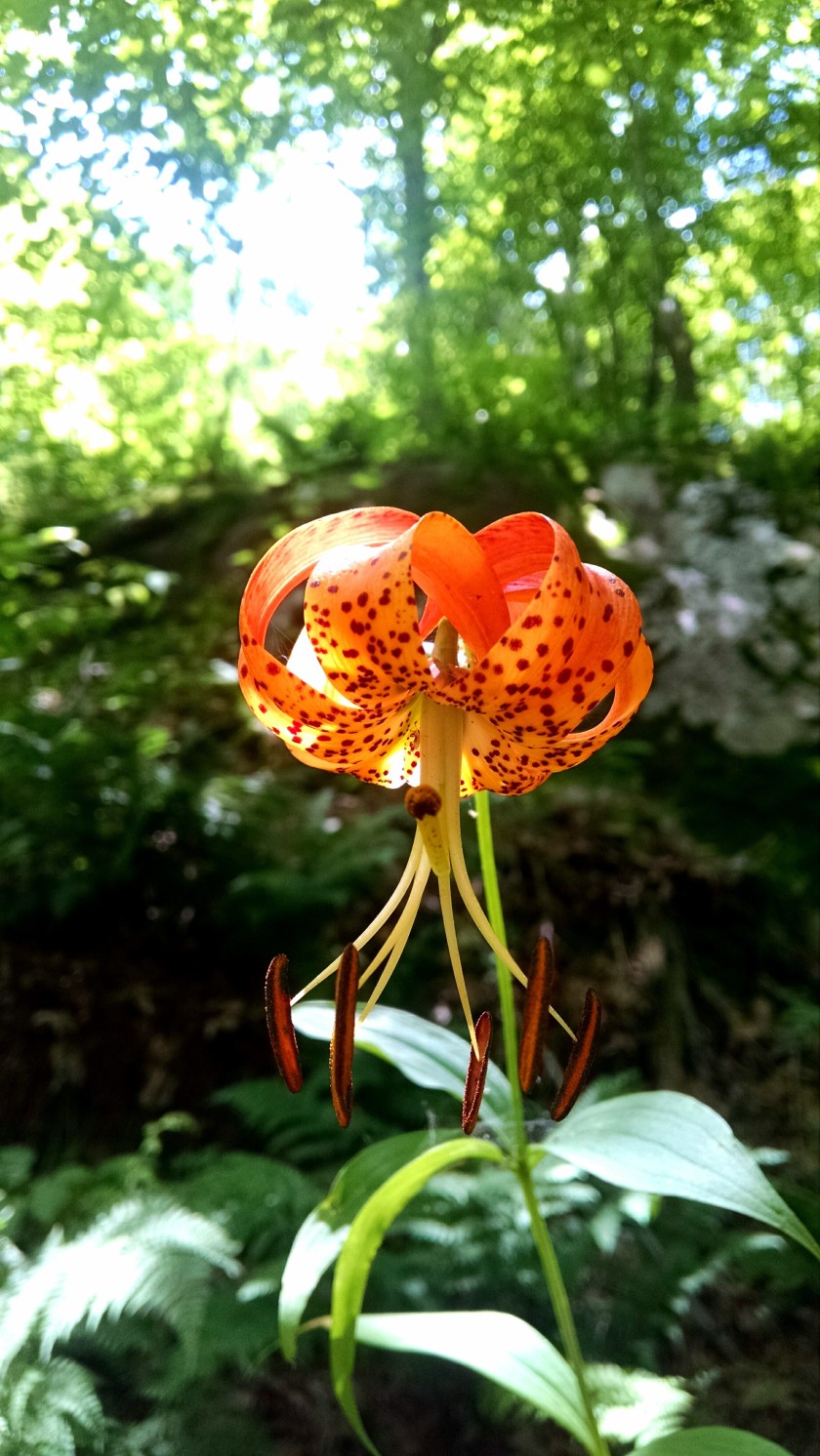 An early morning run to Sherando lake. Of course I couldn’t resist getting in for a little while. I had the whole lake to myself.